The Story Behind the Tummy Shield

The inventor of the Tummy Shield™ is an Australian engineer and the father of four young children.

During the pregnancy of their first child, while driving with his wife who was about 7 months pregnant, they encountered a traffic situation in which he had to swerve to avoid an accident. That action resulted in the car hitting the curb and coming to a sudden stop.

Nobody was injured at this incident, but his wife had some minor bruises to her tummy, and she commented when asked if she is OK, “I am fine, but I am worried about the baby.”

The pregnancy progressed to full term and a little beautiful girl was born.

At birth everything seemed normal, but the parents noticed that the child did not progress mentally and physically, they sought medical advice. 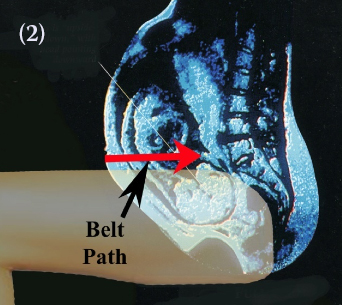 This shows the path of the lap belt portion of the seat belt during 3rd trimester of pregnancy. (Hofferbrth, 2013)

They were advised that their child has some form of a brain injury, and the doctor commented, “it could have happened anytime during the pregnancy.”

But the parents immediately knew exactly when it happened.

When the parents mentioned this incident to the Neurologist, he commented, “this could be the likely cause of your daughter’s brain injury.”

After having his own child born with a brain injury, which was likely caused by secondary energy transfer from the seat belt to the mother’s pregnant abdomen during a sudden stop/non-crash event, the father/inventor set out to solve a problem which is in the early stages of being understood by the medical and injury prevention experts themselves, namely, the effects of sudden stopping and crashes on pregnancy.

During the pregnancy of their second child both parents started to look for a device that would remove the seat belt away from the tummy area.

All they could find were some devices designed to keep the seat belt low on the belly. Having already done many hours of research into seat belt injuries, the inventor knew these devices would be totally USELESS in protecting the baby in the event of an accident.

He commissioned one of Australia’s leading biomechanical engineers, they built several prototypes and conducted numerous tests including crash tests at high speeds at some of Australia’s most respected and internationally accredited testing facilities.

They knew that for their design to work it must be able to overcome these problems.

After several prototypes and tests they came up with the Tummy Shield™.