Examples of pregnancies lost or harmed in car crashes

According to a 2015 study, the risk of fetal death from a car crash is at least 5 times the risk compared to the first 9 months of a baby’s life. This number is based only on the 227 pregnant mothers and babies who died in a car crash (compared to the 60 newborns who died in traffic crashes in 2012). It does not account for the possibly thousands of times a pregnancy is lost when the mother survives.

This list is a small example of those crashes in which the mom survives but the unborn baby does not. Or sometimes the pregnancy makes it but the baby is born with injuries, including injuries that will affect the family for the child’s life. Two examples of this are the  child who had his voice box injured in a crash during pregnancy and the Facebook comment shown of a mother wishing she had a Tummy Shield for her pregnancy after her daughter experienced a brain bleed after a crash during pregnancy.

(Only a very small number are reported in the news. Based on experiences shared with us, it seems it only makes the news if someone in addition to the baby died or someone was charged with the death.)

August 26, 2020 Fresno, CA Woman in fair condition after losing her unborn daughter when her car was hit by a man running a stop sign while fleeing police.

August 21, 2020 Lorain, OH An unborn child was killed when an SUV blew past a stop sign on Friday night in Lorain. The mother and two children were also hurt. The mother underwent emergency surgery. She is in critical condition. Police said the woman’s unborn child died as a result of the crash. 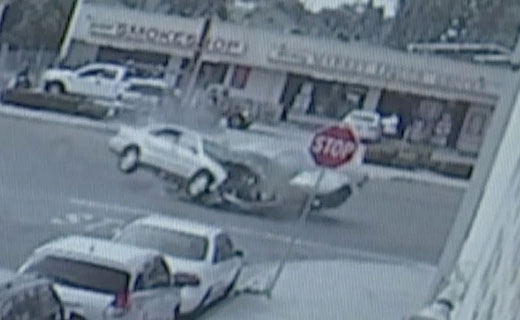 June 26, 2020 Santa Ana, CA Violent hit-and-run causes vehicles to leave ground and kills unborn baby. Eight-month pregnant woman had to undergo emergency surgery. The fetus was pronounced deceased during the surgery as a direct result of the collision.

June 1, 2020 Milwaukee, WI Milwaukee man, fleeing officers and traveling 70-90 miles per hour in a 30 miles per hour zone, slammed into a vehicle driven by a pregnant woman. She had to be extricated and was taken to the hospital for treatment of a shattered pelvis. Her unborn baby boy died in surgery. Three others who were in her vehicle suffered minor injuries.

May 29, 2020 Johns Island, SC An unborn baby died as a result of a car crash that possibly involved an impaired driver

May 13, 2020 Philadelphia, PA DUI driver causes crash that kills father-to-be and unborn baby. Mother, who was 5 months pregnant, injured, losing a leg and requiring a hysterectomy.

February 8, 2020 Roane County, WV Mother and unborn baby die after complications from a crash on their way home from baby shower. “Any time a pregnant woman’s involved in a crash, there’s always concern about their baby,” West Virginia State Trooper E.C. Greathouse said. “We didn’t realize that this was going to be the ultimate outcome that the mother was going to lose her life as well.”

January 4, 2020 Soso, MS A 24-year-old Mississippi teacher lost her unborn baby eight months into her pregnancy after she was hit by a driver with a history of DUIs while driving home from her baby shower

December 20, 2019 Tampa, FL A woman’s unborn baby has died after a chain-reaction crash in Pasco County on a Friday. Her unborn baby was pronounced dead on Monday.

December 19, 2019 Westlake, LA A Westlake man has been arrested and charged with 3rd degree feticide and vehicular negligent injuring after a two-vehicle crash. The front-seat passenger in the other car was 21 weeks pregnant. Authorities later learned the unborn baby died at the hospital.

May 23, 2019 West Chester, PA A Delaware County couple recount the “hell” their lives have become since a crash involving a DUI driver who fled the scene after slamming into their car, claiming the life of their unborn son. The 16 week pregnant woman suffered moderate injuries in the crash, but felt her water break and was taken to the trauma unit. There, emergency room personnel gave her the horrifying news that while his heart was still beating, the boy would likely die.

May 5, 2019 Franklin Township, OH Fatal crash killed three children (one unborn), injured father and his son, and left pregnant mom with a brain injury. She fought for over a year to stay alive but died 13 months after the crash.

May 5. 2019 Mascoutah, IL Charges pending in crash for failure to stop. Mother in crash was 7 months pregnant. Her child was delivered via emergency C-section in but did not survive. 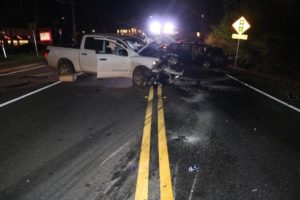 March 24, 2019 Gwinnet County, GA Police have charged a driver in connection with a weekend traffic accident that killed an unborn child and injured three members of the child’s family. Doctors performed an emergency C-section on the 27-week-gestation girl but she died from her injuries.

March 11, 2019 Gwinnet County, GA Police are investigating a crash that seriously injured a woman and killed her unborn child. Mother, who was in the third trimester of her pregnancy, was taken to a local hospital. While at the hospital, her unborn child died.

March 2019 Clarksville, TN Police have arrested a man on vehicular homicide charges for a March crash that killed an unborn child, injured her mother, and another passenger.

February 19, 2019 Wood County, TX Couple in car crash on the way to the hospital to be induced for labor. Parents were seriously injured and baby was lost.

February 9, 2019 Davenport, FL Three car crash caused by car violating right of way of car driven by woman who was 8 months pregnant. The mom was taken to the hospital where doctors determined her unborn baby was dead. The victim’s 1-year-old girl was also in the car but not injured.

January 3, 2019 Todd County, KY A pregnant woman lost her unborn child during a hit-and-run accident. She was due mid-January.

December 29, 2018 Fresno, CA A Fresno drunk driver who crashed into a young couple, killing their unborn baby, will spend seven years and four months in prison. Doctors delivered the baby, Sophie, by cesarean section. Sophie weighed just 3 pounds 1 ounce and was 16.5 inches. She passed away the next day.

October 15, 2018 Killeen, TX Man speeds through stop light, possibly while eating crashes into a car with a pregnant woman and her son. The woman was five months pregnant and that her fetus died as a result of “intrauterine fetal demise, due to placental abruption due to maternal blunt force injuries from a motor vehicle collision.”

September 2018 St. Augustine, FL A woman is sentenced with a DUI after being involved in a crash where her passenger was injured. Her injuries resulted in the death of her unborn child.

September 9, 2018 Hemet, CA A former professional boxer will spend the next 10 years behind bars after killing a pregnant mother of four. Her unborn baby died and she was put on life support, however, doctors pronounced her dead the following day.

July 31, 2018 Cincinnati, Ohio A man was indicted after police said a rollover crash he caused resulted in a pregnant woman sitting in the passenger seat losing her baby. Ohio law states aggravated vehicular homicide is a crime when a driver recklessly causes the death of another or the “unlawful termination of another’s pregnancy.”

July 26, 2018 Atlanta suburb Pregnant woman was transported to a local hospital with visible injuries after hit and run. The unborn child died the next day due to injuries sustained in the crash.

July 18, 2018 Hillsboro, ND Woman charged with death of unborn child after rollover crash. Mom-to-be was 6 months pregnant and lost her child as a result of injuries. North Dakota is one of about 30 states that allows prosecutors to file charges if a fetus is killed during a crime.

July 9, 2018 Los Angeles A 3-year-old boy was killed and his pregnant mother lost her unborn child in a two-car crash on the southbound 110 Freeway in South Los Angeles. (image from KABC Los Angeles)

June 12, 2018 Mountain Home, AR Reckless driver charged with killing unborn baby. According to the medical examiner, the baby sustained a fatal brain injury when the mother was injured in the collision. The baby was alive following delivery, and had just been given a clean bill of health at the doctor the day before the accident.

June 6, 2018 Cygnet, Ohio Pregnant woman was flown to medical center with serious injuries after the driver of a car in which she was a passenger lost control and triggered the 3 car crash. She was pregnant, and her unborn child was pronounced dead at the hospital.

May 14, 2018 Mayes county, Texas Mayes County deputy involved in crash from which unborn baby later died. Mother-to-be “was taken to a Grove hospital in good condition.” Her unborn baby was declared dead the following day.

September 10, 2017 Arkansas Mother and father survive being rear-ended at high speed. Father was driving and the driver’s seat failed, sliding back into the toddler daughter. Toddler daughter died. Unborn baby also died. At first baby’s heartbeat was normal but as day progressed it became weaker.

October 1, 2016 Cambridgeshire Mom was saved from suffering fatal injuries due to the baby bump taking the impact. But tragically baby died from a fractured skull.

September 9, 2016 Oxforshire Mother survives crash that resulted in a 8 car pile-up that killed her 3-year-old daughter and unborn baby son.

April 4, 2016 Australia This is a touchy political issue: Most parents-to-be consider their unborn baby to be a baby but the legal status is questionable depending on where you are. These parents want to keep that baby as safe as possible. Here an Australian mother who lost her unborn baby in a car crash wants to change Australian’s legal status of a fetus. Watch the 9news.com.au story here.

March 7, 2016 Mountain Brook, Alabama 22-year-old man charged in head-on crash that left a pregnant woman seriously injured and took the life of her unborn baby girl at 33 weeks pregnant. Alabama law allows authorities to charge a suspect with the murder of another human being, including an unborn child. 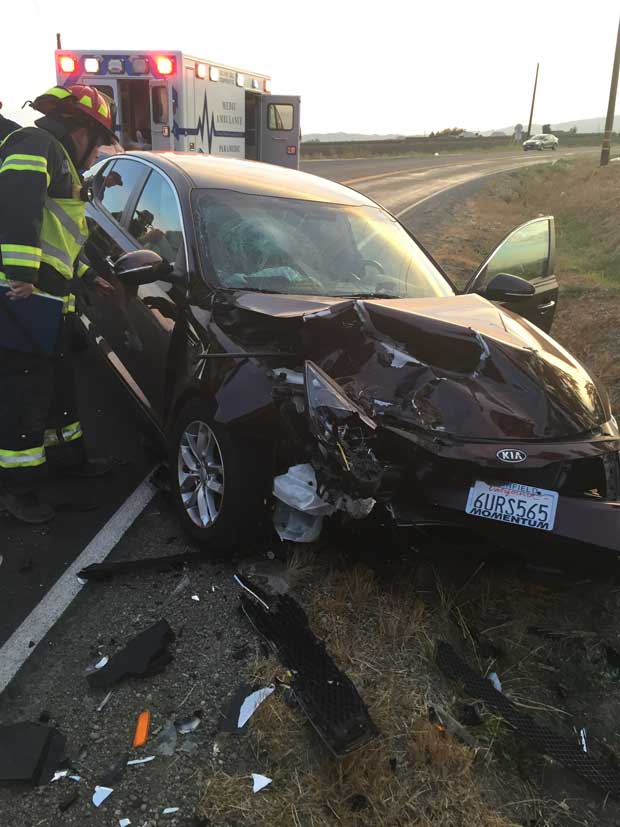 October 14, 2015 Dixon, Calif. (This was not in the newspaper that we could find. The crash image is to the left.) Baby dies after emergency c-section from fatal injury after pregnant mother experienced a car crash as a passenger. Mother says her only injury was from the seat belt which crushed her baby’s skull.

May 23, 2015 Wilmington, NC Pregnant mom was forced to undergo emergency c-section to save their unborn child who days later died with inoperable injuries from a car crash the family was involved in which also killed the baby’s toddler brother; driver charged

Dec. 25, 2014 Nashville Pregnant woman and her passenger were transported for non life-threatening injuries, her unborn baby died the next day; man charged with vehicular homicide by intoxication

Feb. 2014 Tucson, Ariz. crash where pregnant woman was injured and lost her baby.

2014 Australia Mom petitioning in 2016 for new law in Australia that will allow charges to be brought against people who kill unborn children who are more than 30 weeks along. At 39 weeks gestation the loss of her daughter, Sophie, was considered one of mom’s injuries.